Is Islamaphobia a real thing?

I like to think contentious thoughts, trust me I am writing some other blog posts that are rather contentious of my own beliefs. "In all affairs it's a healthy thing now and then to hang a question mark on the things you have long taken for granted." - Bertrand Russell

Well this one is on Islamaphobia. Or the perceived racism that people get accused of when questioning Islam.

There is no doubt that humans stereotype, and perform irrational prejudice based decisions. Even the most rational of us will still check for our wallet if we are bumped by a person in a train who looks like they had seen better days. This is simply mistrust, something that served us well when we had to mistrust a strange looking creature for example that could kill us, if we mistrusted it and ran we survived either way, if we didn't and the creature was deadly then we wouldn't have passed on our trusting genes.

The common argument is that Islam is not a race, so it can't be racism. The joke that ran rife on Twitter post the Ben Affleck V Sam Harris debate was along the lines of: Tomorrow I am going to convert to Chinese. Which does make a good point, you can convert to Islam so it is not a race, anymore than Christianity is... or Judaism. But you can be an anti-Semite if you attack a Jew for wearing a yarmulke, just as you can be anti-Muslim if you simply attack a person for wearing a Hijab or Bisht. There are ill-informed prejudging people in the world, information is the only thing that can fix this.

Ah but you can't really convert to Judaism, see here and here. So maybe that is why Judaism gets that get out of insult card. But then really, Judaism is just a belief system, and beliefs can and should  be criticized. Peoples should never be as this is a generalization, this is prejudging someone based on their appearance and is fallacious. As Christopher Hitchens once eloquently put it "Hate the religion, not the religious". 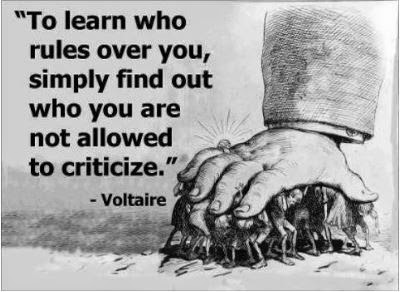 Then again to break apart the word, Islamaphobia. Firstly my dictionary thinks it is not a word, homophobia it has no problem with, racism either. But anyway.
Islamaphobia seems to allude to the fear of Islam. Homophobia is not really the fear of homosexuals. I doubt many straight people fear that a homosexual is going to take away their rights, homophobia is more a disgust that homophobes have at the idea of same-sex relations. I heard it best put as you aren't afraid, you're just an arsehole.
So maybe it is the similar kind of unfounded fear here of Islam as homophobes have of homosexuals, don't get me wrong there are definitely some people out there who have unfounded fear of Islam, and will simply prejudge any Muslim they see as a member of Isis/Suicide bomber or whatever their culture has taught them. This is wrong and should stop now.
The points however that Sam Harris and Bill Maher make are fair and do allow for maybe a founded fear of some Muslims. There is a larger percentage of Jews who decry Israel's war on Palestine over Muslims who decry ISIL, with two different Jewish groups against the state itself.

Onto Indonesia which was mentioned as a shining light in the Muslim world. Indonesia is not that great, especially if you are an Ahmadiyya (a branch of Islam)... http://en.wikipedia.org/wiki/Persecution_of_Ahmadis#Indonesia you also are in trouble if you question your faith; http://inewp.com/outrageous-indonesian-atheist-in-danger-because-of-blasphemy/
I think what Reza Aslan on the panel was trying to say has been said very well by Steven Weinberg; "With or without religion, you would have good people doing good things and evil people doing evil things. But for good people to do evil things, that takes religion."
http://www.patheos.com/blogs/friendlyatheist/2014/10/05/reza-aslan-is-wrong-about-islam-and-this-is-why/

So maybe that is it, reverse the percentage of Muslims that believe in death for apostasy, reverse the number of Muslim countries that are anti-Jewish, anti-homosexual and  then you can complain when people try and use reason to attack your faith and attrocities attributed to it. Affleck was right in one of the last things he said, you don't criticize the people, you criticize the acts, and that is all I believe I and others are doing.

Maybe a reverse-ISIL should form, that fights to end capital punishment in Muslim countries, that ends imprisonment for apostasy/homosexuality and expression of art, science and sexuality, you know fights for peace. Til then there is no such thing as Islamaphobia from people who know the numbers Sam Harris talked about, that is now probably a tens of millions of people thanks to the internet and the reach of Realtime with Bill Maher.