It was meant to be too

If the last "Meant to be" blog post was meant to be, then the following were also meant to be....

On Thursday I was waiting for a train to work at my local station, the train was delayed due to issues and it being sunny I was sitting on the opposite side of the platform, a guy in his 60's sat down next to me and commented on the trains being delayed. I looked up from my book and responded, they always are. He saw I was reading and said, is it a good book, I said yeah. He asked what it was called, I turned it over so he could see the cover "God is not great - Chistopher Hitchens". "oh", he replied. I was expecting a backlash, but he continued "I have got that other one, by Dawkins, you know the one that made all the press", I responded "The God delusion?" he said yeah. "Is that one good?" he asked, pointing to the book. "yeah", I responded, "very articulate, more of an argument than just the facts". We then went back to talking about his plans on where he had to get to, I responded with some suggestions, I was a little taken-a-back as from all outward appearences he seemed like he would be a believer, 'C'est la vie', say the old folks, 'it goes to show you never can tell.

So on Friday in the evening I was heading into the city with a colleague, I was on my way to the Sydney Atheists talk on Cosmology to celebrate Carl Sagan day. The colleague on his way to dinner with friends, had asked me where I was going and I told him, we began to talk about the sillyness in religion, the train was rather crowded and the man sitting across from us looked a little offended so I changed subjects. The colleague decided to get off at an earlier station and have a walk as he was to early to meet his friends. The guy across from me straight away started conversation asking where I got my shirt from; 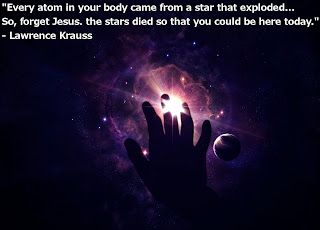 I responded that I had designed it myself and printed it at www.vistaprint.com.au
We then got to talking about cosmology, and he asked if I had seen a debate between Hitchens and D'Souza (at least I heard D'Souza, so maybe it was one of the others), I said yes. I then went on to tell him of my experience of meeting Krauss in Melbourne at the GAC, and how nice he was. I mentioned where I was going (Sydney Atheists monthly talk to Celebrate Carl Sagan day on odly enough cosmology) and told him of the talks, I told him to look us up.


These two incidents must have been meant to be, destined by the FSM.

On the above shirt, you are free to reprint it from my prospective (the image I was led to believe is creative commons here http://openwalls.com/image?id=4179, if you are the owner and don't want it used let me know), if you really want to send some money my way you can send it to Sydney Atheists on the right or to Doctors without borders (Medicine Sans Frontiers) or the Responsible Charity.
I will put up some of my other shirts later just look for the posts tagged shirts.