This is supposedly the most effective argument for belief in a God. I have seen it so many times, and I am now a believer... oh wait no I am not, so why doesn't it work on me and most other non-believers.

Anthony Flew (possibly, it could have been his ghostwriter) in his book claimed it is what convinced him to abandon atheism and switch to deism... not theism of course, as that is at best as far as you can get if you accept the argument from design, deism. Remember deism yeah, the belief that there is a God or gods but not one as imagined by humans, not one that performs miracles or intervenes in human affairs... also known as the absent deity syndrome :)

So to get to the argument, basically it states look at the *insert natural phenomena here*, usually something human centric. The complexity of the eye, the bacterial flagellum (not a sperm flagellum, as that is related to sex and there is one thing religion can't do and that is acknowledge the vulgar), the beauty of a flower or sunset, the perfect distance the Earth is from the Sun, the way the environment seems to fit together to just work, and the complexity of the human brain.

Of course all of these are amazing things, things we know more about due to science... not religion. The anthropic principle basically answers all of them, but it is long and dry. Douglas Adams said it best;
"Imagine a puddle waking up one morning and thinking, "This is an interesting world I find myself in - an interesting hole I find myself in - fits me rather neatly, doesn't it? In fact it fits me staggeringly well, must have been made to have me in it!" This is such a powerful idea that as the sun rises in the sky and the air heats up and as, gradually, the puddle gets smaller and smaller, it's still frantically hanging on to the notion that everything's going to be alright, because this world was meant to have him in it, was built to have him in it; so the moment he disappears catches him rather by surprise. I think this may be something we need to be on the watch out for. We all know that at some point in the future the Universe will come to an end and at some other point, considerably in advance from that but still not immediately pressing, the sun will explode. We feel there's plenty of time to worry about that, but on the other hand that's a very dangerous thing to say."

Obviously in this story the earth is the hole and humanity the puddle, having evolved in the world that fits us rather well.

There are still arguments from negative design; a heart that has too few arteries to supply it with blood causing premature heart failure, the hearts construction is fine for marine animals. Similar for the placement of spine along the back for an upright walker and the lack of extra sets of teeth for an animal such as us that lives so long, not to mention the laryngeal nerve that I am sure you have heard of, that runs from brain to voicebox to allow all animals to control its muscles, except it makes a detour below the heart which is a lot longer than needed for humans, but think about the poor Girraffes where the detour is 18feet.
Creationists will quickly say these negatives are simply due to "the fall" when Adam and Eve where kicked out of the Garden, but none of the animals sinned as far as we know, so why where they punished? Why are some of the "punishments" a distinct part of our personality such as people who personality disorders, or other challenges. Why are some of these punishments impart an advantage, that would only surface in the modern era, such as colour blindness genes being associated with extra cones in their female parent. Why would some of the animals that cause this malady, that supposedly came after the fall not be able to exist prior to the fall (remember Adam named them all, so there is a problem here), why do some such as lice show evidence of evolution along side humans. Of course they can answer all of these with a wizard God did it.

The universe is really not designed for us, most of it is deadly to us, too close to a star, neutron star, black hole, or galactic core and you will die, the blackness of space at a whopping 2.7Kelvin or -270.45 degrees Celsius (-454.81F) even and this freezing temperature the pressure is so low your blood boils, not to mention trillions of wandering asteroids and planets the size of Jupiter ready to wipe us out.
But even if all these design flaws didn't exist then so what, it looks designed. Maybe we design things that look like nature because we are a part of it, we can't design anything to not look like nature as we have no experience with things that aren't part of nature.

"Complexity is not an indicator of design" - PZ Myers 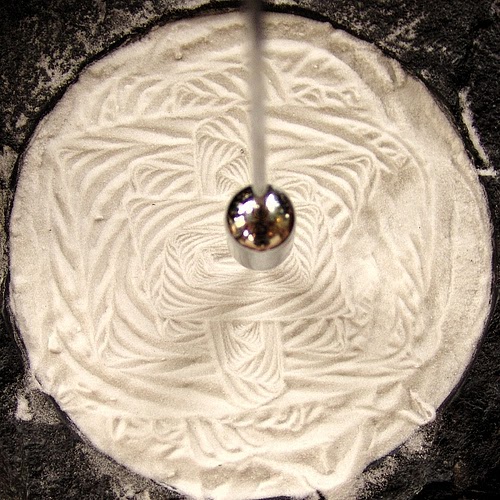 Say a gravity Spirograph aka a pendulum Spirograph, sure there is a designer in the device, but the complex pattern that emerges, emerges due to natural laws. Similarly streams and rivers, no design but brilliant in their complexity. If all we have observed, and all we have evidence for so far is natural processes forming complex structures then no one has the right to invoke a creator.

The next argument from design, is a bit of a round about one, but our good friend William Lane Craig uses it without knowing. When he uses his version of the Kalam cosmological argument, he adds the universe has to have and uncaused cause, and that God is defined by Christianity as the uncaused cause, which I assume they take from "All things were made by him; and without him was not any thing made that was made." - John 1:3 or maybe the extremely dramatic "I am Alpha and Omega, the beginning and the end, the first and the last." - Revelation 22:13. Neither of those preceding verses actually say uncaused cause, but lets grant it. Surely saying God is the eternal uncaused creator of the universe is much more complex than granting the universe as being an eternal uncaused creator of itself. Adding God into the picture adds a consciousness, adds unlimited knowledge and power to that consciousness, it increases complexity so immensely that it can be discarded till the God hypothesis gets that same immense level of evidence... we already have a fair bit of evidence for the universe existing, none for the supernatural other than anecdote and possibly power encouraged hearsay.
Posted by Morgan at 8/16/2014 11:08:00 pm